What Are You Playing?

I also love tetris. I must still admit i was humbled the first time i saw this video. Who wouldn't?

I believe tetris is a very different game if you play solo or against others.

I have to try this tetris99 interation. It is just that i have been let down so often with tetrises that tried to reinvent what didn't need to be change, that i more or less avoided it.

Edit: arf! If they don't multiplatform this game, i won't be able to play it. I gave my switch to my daughter. They need to port it to PC.
"Tolerance is the lube that helps slip the didlo of dysfunction into the neko of a civilized society" -Plato
Top

I think fullmetal is falling into drugs :'(

fragoff wrote:arf! If they don't multiplatform this game, i won't be able to play it. I gave my switch to my daughter. They need to port it to PC.

Yer, I was surprised when it was a switch exclusive, I don’t know if it’ll stay that way forever, I’d be surprised if it did, but for now it seems to be the second biggist draw to people buying Nintendo’s online service so they probs wanna keep it to themselves for awhile.
Everything I say is in relation to me, objectivity doesn't exist.

I will probably be getting Tetris 99 when I can figure out how to get my Switch to connect to my home's wi-fi. Til then I will continue to play Dead Cells.
Top

Dead cells is good.
"Tolerance is the lube that helps slip the didlo of dysfunction into the neko of a civilized society" -Plato
Top

Ive had this for a bit over a week now and just failed to the mention it. I got Wargroove and it’s really good, also I’m playing the switch version, becuase having that portability is great. I missed advance wars so much, even if we were getting fire emblem I wanted inti to also give us more advance wars but it really didn’t look like it was happaneing.

But wargroove is a really great spiritual successor, it’s more tactical in some ways and less tactical in others. For instance I’d say the units allow for more tactical thinking, since you can get crits but they’re not random, they’re based off criteria that you have to set up and usually doing something less helpful to you in how you get crits, so it’s a risk reward system. It also allows you to play around with what units can do more.

For instance in advance wars no ranged unit can move and then attack, but archers can move and then attack in war groove, so how do you keep it balanced. Make them do crits if you don’t move them, so it’s using the risk reward system but also changing how you think about playing them, the moving and firing is only fair cause of the crit system.

The way taking cities or villagers in this game is much more strategic and there’s water villagers now so there’s more use for naval warfare. The only big downside is that fog of war is less tactical cause forests aren’t as good of hiding places as they were in AW. But that’s a small price to play, the meta has moved in the no fog of war direction anyway, so that’s fine.

Also not only can you make your own maps and levels like in AW you can make your own campaigners, customise the way the world map looks and map it all out your self. You can make all your own dialog and really make a full story of your own and upload it online. This plus the online multiplayer makes this game endless bascially, I’ve already downloaded a hand full of custom campaings people have made and they’re super fun, if people keep making them and people keep playing online there won’t be much reason for me to take long breaks from this game.

I’m really loving it, Jesus look at how long I gushed about it and that’s just the surface, this game is great. If you loved Adavance wars then please check it out. It’s not just for switch, it’s also on PC and Xbox and will be coming to PlayStation later this year.
Everything I say is in relation to me, objectivity doesn't exist.

That moment when.... you play Kantai Collection on World 1-4 and your air support is incompetent... 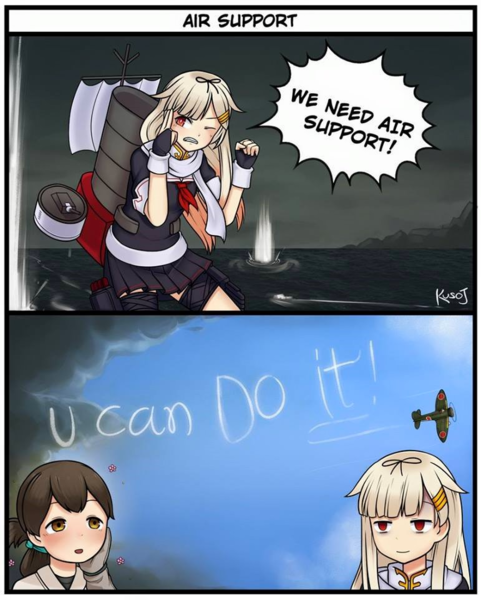 Well... World 1-2 was easy, world 1-3 is doable if you have different types of ships, don't just stick with the lolis (the destroyers) and you should be fine. A tip from me.... try PvP matches to get loads of experience first.

I'm really enjoying this game so far, tons of characters to choose from if that's what you like.
My advice - Try to get an aircraft carrier as soon as you can, you can get "Akagi" for free by completing a certain quest and you could try to beat world 1-4 with her.
My Anilist: https://anilist.co/user/MojaveRena/
Top

need i say more? (in pre order on steam)

hope we get the 13 clans this time, and maybe some bloodlines! baali infernalist anyone?
"Tolerance is the lube that helps slip the didlo of dysfunction into the neko of a civilized society" -Plato
Top

While still playing Vermintide 2 (and not Apex Legends because the crashes keep getting worse), I'm back in Diablo 3 yet again to finally try my hands on hardcore mode. The prospect of perma-death always seemed very daunting to me and frankly not worth the effort. But reading an article recently on how Diablo 1 was originally created with perma-death in mind sort of made me curious to give this challenge a try.

And what's the verdict? After playing one character (Barbarian) to level 67 (max. level is 70), I have to conclude that this game is way too freaking easy. Of course, I prioritized defense slightly higher than in core mode. But still, in my entire playthrough, I dropped below 30% HP maybe 3-4 times, and then there's still a passive skill which would've prevented my death upon dropping to 0 (on a 2-minute cooldown). And I wasn't even playing on the easiest difficulty.

I'm conflicted: On the one hand, I'd hate my character to die for good after putting in several hours of playtime. But on the other hand, this just turned out to be a walk in the park, so the challenge which hardcore is supposed to present... just wasn't there.

Eh. The game is still fun enough to play, plus I don't need sound, so I can listen to podcasts, music or whatever in the background.