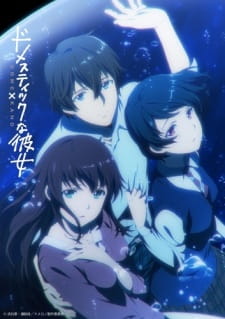 Plot:
Natsuo Fujii is in love with his teacher, Hina. Attempting to forget his feelings towards her, Natsuo goes to a mixer with his classmates where he meets an odd girl named Rui Tachibana. In a strange turn of events, Rui asks Natsuo to sneak out with her and do her a favor. To his surprise, their destination is Rui's house—and her request is for him to have sex with her. There's no love behind the act; she just wants to learn from the experience. Thinking that it might help him forget about Hina, Natsuo hesitantly agrees. After this unusual encounter Natsuo now faces a new problem. With his father remarrying, he ends up with a new pair of stepsisters; unfortunately, he knows these two girls all too well. He soon finds out his new siblings are none other than Hina and Rui! Now living with both the teacher he loves and the girl with whom he had his "first time," Natsuo finds himself in an unexpected love triangle as he climbs ever closer towards adulthood. - Mal Rewrite

*Missing info will be added once known.
**Some links can’t be more specific cause of me being region locked from some.
Everything I say is in relation to me, objectivity doesn't exist.

Looks like this will be the 'scum's witch' of the season, maybe less extreme.
Love the fact that something d8d happen right off the bat.
"Tolerance is the lube that helps slip the didlo of dysfunction into the neko of a civilized society" -Plato
Top

Honestly I was scared going into this. Heavy dramas like NEtsuzou Trap and Scum's Wish
are really hard for me to watch (not that I actually stop watching them). But so far, so good. I'm just scared knowing that the teacher they talked about in the first episode is going to be Shinji storm in my heart
https://myanimelist.net/profile/Sethomaha
Top

Episode 2
Still going strong. I have great hopes for this title!
"Tolerance is the lube that helps slip the didlo of dysfunction into the neko of a civilized society" -Plato
Top

Episode 3
Spoiler:
Again, so far so good. Nothing too heavy for me to handle. So long as there isn't any heavy NTR, I'm good.
https://myanimelist.net/profile/Sethomaha
Top

SethAmaha wrote:Episode 3
Spoiler:
Again, so far so good. Nothing too heavy for me to handle. So long as there isn't any heavy NTR, I'm good.

Well, technicaly, this cannot go NTR. So you are safe.
"Tolerance is the lube that helps slip the didlo of dysfunction into the neko of a civilized society" -Plato
Top

This show is the bomb! episode 5 already and not a single thing wrong to say about it! It does not fear to go in places, do not shy away from everything that i despise in most romance(that they usualy shy away from). It takes things head on! If this keeps up, it will go up there as one of the top romance ever, even dethroning gems like scum's wish.

If you like romances and are not watching this show, you are a fool!
"Tolerance is the lube that helps slip the didlo of dysfunction into the neko of a civilized society" -Plato
Top

Spoiler:
will they? won't they? we are getting dangerously close to a convulated drama for the sake of drama.
"Tolerance is the lube that helps slip the didlo of dysfunction into the neko of a civilized society" -Plato
Top

BEST DRAMATIC ROMANCE EVER!!!!!! well, maybe not the best, but up there with the cream of the crop. Almost everything was well done in this anime. If at some point i slightly feared a 'ever none ending drama for the sake of drama', it luckily was a fleeting feeling that lasted but one episode. All the rest was excelent.
Thank god for the team for not shying away from kisses and other normal relational activities. a thing that is sadly not the norm in romance.
For the rest, you like drama? you like romance? you didn't watch it yet? WTH ARE YOU WAITING FOR?????
"Tolerance is the lube that helps slip the didlo of dysfunction into the neko of a civilized society" -Plato
Top
Post Reply
10 posts • Page 1 of 1