So I have decided to try and revive the Watch Along and this time we're doing a category that I'm pretty sure was never done, although we may end up with some overlap later on. So for now let's do Magical Girls.

Magical girls, as the genre suggests they’re girls that are magical! Weather it’s fun, cute hijinks or deals with the devil bringing despair to out protagonists magical girls have been a staple of anime for a long time and are almost an exclusively Japanese genre not seeing much play outside of it, despite sailor moons and others being imensouly popular even in the West.

This time we’re going to be watch Lyrical Nanoha.

If you don't know how this works then first off we have the 'Nomination Phase' where members of the community can nominate shows that fit the category. The rules for this phase are pretty simple.
1. One nomination per member
2. It had to fit the category, I'm the final arbiter on if it counts. but feel free to get creative with what really counts as a Magical Girl, I'll be pretty loose with the term TBH.
3. Not a rule but please provide a Key Visual along with your nomination.

Overall rules:
1. Keep legal streaming in mind
2. Usual OS rules, be nice and don't ruin others fun.
3. No hate watching! But you are allowed to not like the show and always come back to talk, but don't go too far, nothing wrong with explaining why you dislike it tho.
4. However no one needs to justify their opinion, all input is valid as long as it doesn't break any of the other rules.
Last edited by Eira on Sat Nov 17, 2018 11:50 pm, edited 4 times in total.
Everything I say is in relation to me, objectivity doesn't exist.

Woohoo, the watch-along returns! Alright. Unfortunately, I just watched Magical Girl Raising Project a bit over a week ago, so that one's out. The easy way to go for me would be to nominate Yuki Yuna is a Hero, since I enjoyed that series a lot and wouldn't mind a rewatch. However, I'm going for something else:

I've never watched Sailor Moon. Since we have a semi-recent reboot to the series, I suppose now would be as good a time as any to rectify that.

As you might know, I don't stream anime, but a quick Google search tells me that the series is available on Crunchyroll.
Also, from what I've found, there oddly seems to be a season 1 and a season 3. My guess is that since season 1 spans 2 cours, they counted that as 2 seasons internally. If this title gets voted, I'd suggest we go through both seasons (or all 3... Man, this is annoyingly confusing to talk about

As a general remark, 1 episode per day is what we've used in the past, and I think it worked great. Mind you, I personally wouldn't be opposed to watching 4 per day (in which case this would be my 'full-time anime' for the duration of the watch-along, so to speak). But I don't think that's a healthy amount for other people who want to keep up with seasonal stuff 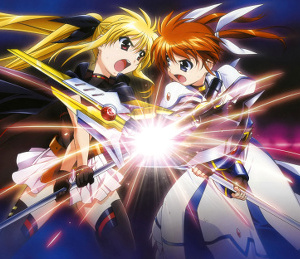 It has been noted by TV executives that Magical Girl series usually have Multiple Demographic Appeal — not only are they popular among 4 to 9-year-old girls, but also among 19 to 30-year-old males. Shows such as Pretty Cure attempt to please both demographics. Nanoha is made exclusively for the second.

The series has a rather unusual production history. Nanoha first started as a Token Mini-Moe in a certain H-game named Triangle Heart 3: Sweet Songs Forever, part of a trilogy of such H-games. She was a very minor character, but proved popular enough to eventually get a mini Spin-Off game where she becomes a typical sickeningly sweet Magical Girl. A few years later they decided to make an anime based on that, and so Magical Girl Lyrical Nanoha was born. Said series proceeded to throw in a bunch of tropes that would be more associated with Humongous Mecha shows for good measure, simply because a production crew member noted that Nanoha's costume design made her look like a Gundam. From there on she went on to become one of the most badass Magical Girls yet to have existed. (Tvtropes)
Join my discord!
https://discord.gg/gU4VJjC

Madoka magica
...since someone already put magical girl raising project out there.
"Tolerance is the lube that helps slip the didlo of dysfunction into the neko of a civilized society" -Plato
Top

Here to "spark" ideas since March 2017. You're welcome

Well, I rewatched Madoka only a couple of months ago, but... what the heck. I'd be down for it, anyway.

I'll nominate s This a Zombie? for the watch along.
I haven't seen it before but I've heard it's very funny.

streaming on funimation https://www.funimation.com/shows/84959/. Was streaming on CR but unfortunately I think it's gone due to the recent CR funi breakup.
Looking forward to the watch along being back. 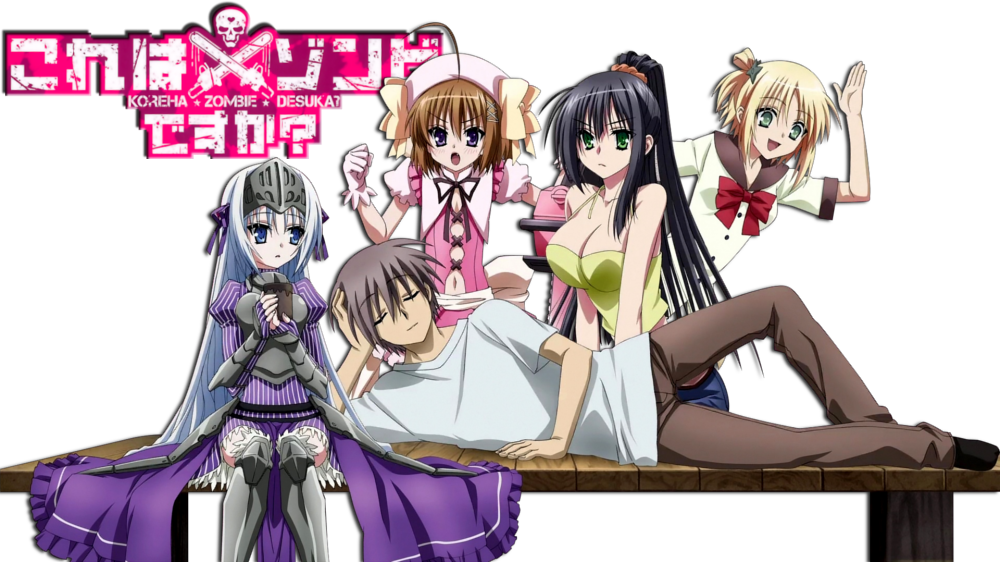 I'dd like to propose a 2 round votes. First round to pick the top 2 choices, second vote to give those votes that lost on first round the opportunity to have a vote that matters in the end.

It also garanty the legitimacy of the winner, so that the first place doesn't win by 3 votes wile there were 5 other titles gattering 10 votes.
"Tolerance is the lube that helps slip the didlo of dysfunction into the neko of a civilized society" -Plato
Top

fragoff wrote:I'dd like to propose a 2 round votes. First round to pick the top 2 choices, second vote to give those votes that lost on first round the opportunity to have a vote that matters in the end.
It also garanty the legitimacy of the winner, so that the first place doesn't win by 3 votes wile there were 5 other titles gattering 10 votes.

I don’t know, I don’t think it’s really neccasery at the moment and will just take up more time, looking back at the older watch alongs I don’t really think it would change anything. For now let’s just do it the normal way and then maybe in the future we can consider changing it to that if need be, it’s deifntly an idea I’ll consider. But for this first revival one I don’t really wanna complicate it too much.
Everything I say is in relation to me, objectivity doesn't exist.

I think Eira has a point here. I get that watching an older show makes for great conversation, but with all the shows I'm watching (and I'm sure a lot of other feel this way) finding time to do another one is extremely hard to do. I was going to nominate Symphogear myself since it is available on Crunchyroll, but Eira's point made me realize that I would struggle to get in that conversation for time's sake. Then again for non sub watchers, any other proposition is also a no go so I struggle to come up with a solution for this.
https://myanimelist.net/profile/Sethomaha
Top

Ayuu wrote:I haven't seen it before but I've heard it's very funny.

Oh, believe me, it is

. Unfortunately, I rewatched the show not too long ago, so I'm not too enthusiastic about revisiting it yet again. But I think for the sake of the watch-along, I'd do it, regardless.

SethAmaha wrote:Then again for non sub watchers, any other proposition is also a no go so I struggle to come up with a solution for this.

I mean, if it's a solution that works for everyone except me, by all means, don't blow off the idea. I won't take part in it if there's no dub, but that shouldn't keep you guys from having fun if there's no other way.