Heya everyone, thanks for finding your way here

. I came up with a (hopefully?) fun little game to pass some time. Here are the rules in short and long version:

One person (the judge) names a character. 3 (or more) players suggest a character with similar traits. The judge then decides on the candidate they liked the most and declares that player the new judge.

The game is played in rounds. At the beginning of a round, the current judge names a character – any character – in anime or related media, plus the title they're from (film, series, book, video game, ...). Adding a picture is optional, but generally advised. A short description of said character is also appreciated.

After that, players each name a different character who they think resembles the judge's character in some way, shape or form. I would encourage you to write a sentence or two (or even a paragraph) outlining how you think your choice and the judge's character are similar. It could be a similarity in appearance, in personality, or something completely ridiculous that evokes a chuckle or two.

Length of a Round

Each round lasts until:
a) 3 or more players have suggested a candidate (any number of players can participate until the judge posts their decision)
b) only 2 players have replied and 3 days have passed.
As soon as either condition is met, the judge declares one of the suggestions the winner.

If the judge fails to respond within 3 days, the player who posted the first reply automatically becomes the new judge and the next round starts.

On the flipside, if a winner is declared but doesn't propose a character for the next round within 3 days, the prior round resumes and the judge is asked to make a different choice among the remaining players.

The criteria for the judge's decision – i.e. whether to go for the most convincing or the most fun suggestion – are completely up to the judge. The concept is similar to that of Cards Against Humanity, if any of you know that game.

Now, there's the obvious problem that nobody knows every anime character out there. But even if you (as a player) are unfamiliar with the judge's character, you can either just go by their looks or read up on them. And if the judge doesn't know the character you proposed – well, that's why I encourage everyone to type out your reasoning for choosing the character you chose. This way the judge will at least have something to go on.
Last edited by BlueSpark on Tue Apr 28, 2020 5:04 am, edited 17 times in total.

To get us started, I'll pick the first character A:

This should be fun! (I love Cards Against Humanity, btw)

BlueSpark wrote:To get us started, I'll pick the first character A:

Kōtarō Takebayashi from Assassination Classroom, because he thinks 2D waifus are superior to 3D ones. (If you've watched the Koro-Q spinoff, this is revealed xP)

And because he has glasses, I suppose ^^'

Tomoya Aki from How to Raise a Boring Girlfriend aka Saekano

Tomo was the first person that came to mind because they have a similar look, similar genre, and they both live the hard otaku life-style. I was kind of afraid of this... Requiring 3 people to reply before the game can progress certainly slows things down. I'll just bump the thread and hope someone else will chime in and make a suggestion.

BlueSpark wrote:I was kind of afraid of this... Requiring 3 people to reply before the game can progress certainly slows things down. I'll just bump the thread and hope someone else will chime in and make a suggestion.

Creativity Corner is sorta a dead section. Maybe moving this to General Discussion with the tag [Forum Game] will help? I'm kinda sad, because I think this is fun so far xP
Top

thegenkiguy wrote:Creativity Corner is sorta a dead section. Maybe moving this to General Discussion with the tag [Forum Game] will help?

I guess you're right. Although that goes against my intuitions as a forum user: On any kind of message board, I figure it's usually a good idea to keep the umbrella category - the "general" subforum - from overflowing as much as possible. But since all the other forum games are also over there, I guess I'll ask Andrew to arrange the move. Maybe it actually will help people notice the thread.

I hope you'll allow me to bump this just once more. Since we've got a couple of new members, maybe we can get this game rolling (I was almost going to add "again"... Yeah, this is sad :/).

Round 2 let me try again! Now I understand the rules better. So a character like Keima, mines a different gender but based on the knowledge I know about Keima I think this will do. Even if it's a different gender and not a look alike in the slightest.

She's a hardcore otaku, much like Keima she loves games (including dating sims!) And spends all of her free time when not at school, gaming, watching anime or reading manga. She goes all out for her hobbies and loves to collect stuff even if it means buying duplicates. 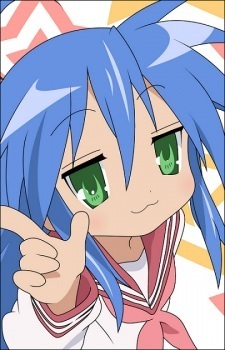 Crash Kamio wrote:Gonna try my best with this cause this game seems fun. This is going based off of looks, what little I know about the show and that he writes. I haven't seen much of Saekano outside of episode 0 and 1 so this may be a miss.

Sorry Kamio, that's not quite how the game was intended

. We're still looking for a 3rd suggestion of a character similar to Keima Katsuragi (my initial mention). Once we get that 3rd candidate (alongside Takebayashi and Aki), I'll pick one of the three and declare them the winner. Whoever suggested the winning character then gets to pose the next challenge (i.e. pick the next character A).

So, can you think of anyone who shares any traits with Keima?